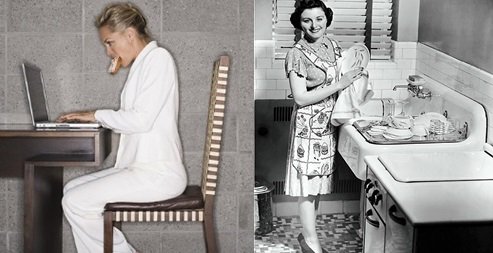 According to SAGA research, the average waist size has ‘grown’ 7 inches since the 1950’s. Fast forward 5 decades and we discover the average British woman is a voluptuous size 16.

Researchers believe this jump in weight gain across a majority of the population is a result of our current ‘junk food era’. Convenience and fast foods rule the market, and although a greater awareness of healthy living is steadily coming to the forefront of people lives and government discussions alike, there is still a long way to go.

So how is it our 50’s counterparts managed to stay so slim?

The answer is quite simple, more exercise and less calories!

Svelte figures were courtesy of a strenuous housework routine without the convenience of automatic washing machines, hoovers or a dishwasher. They also burnt far more calories through preparing and cooking dinner from scratch, something many of us can be guilty of avoiding these days. Also walking would have been a primary source of transport, to and from the shops, collecting the children from school and various other daily errands

Due to continued rationing, households were consuming more vegetables to bulk up their meals, and there were of course no processed foods available like there are today.

However, there were specific elements of the 50’s lifestyle that would contradict this healthy image, such as eating more saturated fat and sugar, plus a much higher recorded statistic of smokers (the number of female smokers is double compared to that of today! cancerresearchuk.org) However, it could be argued that these particularly unhealthy eating and lifestyle choices may have been down to lack of knowledge at the time.

So what’s your opinion? Would you swap your washing machine for a clothes wringer, or hoover for a mop, brush and bucket? In our 21st century technology age, it doesn’t seem worthwhile to spend more time on housework than absolutely necessary- so an extra Pilates class a week it is then!

×
Ciro's Brasserie
×
Nelson's Bar
×
Request a Wedding Brochure
×
Make an Enquiry
×
COVID 19 Update: Please CLICK HERE to read about our commitment to COVID security and our latest updates. We look forward to welcoming you soon.

Our spa is now reopen!

Our Spa has reopened all remaining facilities, with spa days, treatments and spa breaks now available!

To learn how we are operating under current health and safety guidance, please read our COVID update.

We have a range of special offers available on spa days, which you can see here.